↓
Home→Books→Civility and Citizenship Produced as e-book 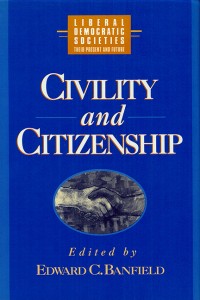 PWPA’s classic book on Civility and Citizenship, edited by the late Edward C. Banfield is now available as an e-book in Kindle, Nook, and I-book formats. Originally written in 1992, this book is more important that ever, showing how the disregard for civility and citizenship both in public life and education is adding to the political dysfunction in Washington, D.C.

If a liberal democratic society is to continue as such there must be widely respected institutions, practices, and modes of thought that encourage or demand the making of concessions where necessary to preserve the degree of harmony without which the society could not continue as a going concern. The obligation of the citizen to obey the law is one such safeguard of order. The idea of civic virtue is another. Civility, the culturally ingrained willingness to tolerate behavior that is offensive, is yet another.

The essays in this volume provide challenging analyses of the close bond between liberalism and democracy and the tensions that arise from the minimalist state and the democratic demand for governmental provisions of welfare services. Each, in its own way, would remind us of the inextricable link between human civility and the fragile functions of liberal democratic societies.—Gregory J. Walters, Department of Theology, Université Saint-Paul, Ottawa, Canada