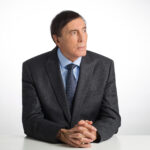 Dr. Alon Ben Meir is a former professor at New York University’s Center for Global Affairs and Senior Fellow at the World Policy Institute. Ben-Meir is an expert on Middle East and West Balkan affairs, international negotiations, and conflict resolution. In the past two decades, Ben-Meir has been directly involved in various backchannel negotiations involving Israel and its neighboring countries and Turkey.

Listen to Professor Ben Meir’s stimulating and encouraging interview on his new developments and proposals for Israeli-Palestinian relations here:

Professor Ben-Meir is featured on a variety of television networks and also regularly briefs at the U.S. State Department for the International Visitors Program. He writes a weekly article that is syndicated globally.

Dr. Ben-Meir has authored seven books related to the Middle East and is currently working on two new books about Syria and Turkey. Ben-Meir holds a master’s degree in philosophy and a doctorate in international relations from Oxford University.

Here below is Dr. Ben Meir’s proposal on which he explains more deeply in our interview

THE CASE FOR ISRAELI-PALESTINIAN CONFEDERATION Alon Ben-Meir—August 3, 2021 by Frank Kaufmann on Scribd