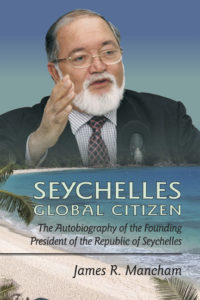 I first met Sir James Mancham in October 2001 in New York. It was less than a month after the 9/11 attacks on the World Trade Center towers and the International and Interreligious Federation for World Peace had organized a conference on Global Violence: Crisis and Hope to which we had both been invited to speak. Many of the speakers were urging the United States to refrain from the preemptive invasion of Iraq, which would violate established just war theory. Our friendship led to me publishing his book War on America Seen from the Indian Ocean through Paragon House.

Through this book, Mancham was trying to help the United States understand the effect its foreign policy was having on the rest of the world and why violent reactions like the 9/11 attack were rooted in the perception that US policy was self-serving, arbitrary, and inconsistent with the democratic ideals it promoted. Mancham viewed himself as a friend of the US, and his daughter and granddaughter live in Florida. He promoted the philosophy that “right makes might” not “might makes right,” and he was trying to show readers that, while US culture promoted the former, US actions in the world seemed based on the latter.

In 2009, I helped Sir James produce, and wrote the Foreword for, his autobiography, Seychelles Global Citizen: The Autobiography of the Founding President of the Republic of Seychelles. This book reveals the life of a statesman, a world citizen, and a tireless peacemaker who, despite being ousted by a military coup in 1977, forged a path of reconciliation rather than revenge for his country. Living in exile for 15 years in Europe, he excelled in business ventures, including selling private islands and managing a German airline company, and did not need to return to help rebuild Seychelles, which had severely suffered under communist rule until the Soviet Union collapsed and multi-party democracy became possible. With the blessing of Presidents Albert René, who had overthrown him, and his successor, James Michel, Mancham became a tireless promoter of Seychelles around the world, and helped to rebuild the economy through tourism and bringing in investments from the United Arab Emirates and elsewhere. Mancham founded the magazine Voice of the Indian Ocean and the Arabian Sea (VIOAS), and was a tireless globetrotter attending international meetings on economic development, interreligious dialogue, and peace. He took on global responsibilities like monitoring elections in Egypt, and received many distinguished international awards for his efforts.

By 2015, Seychelles, a country made up of over a hundred small islands spread over the size of Texas, had become one of the world’s most exotic tourist destinations, and was the location of the honeymoon of Prince William and Kate Middleton. That year Sir James published another book, Seychelles: The Saga of a Small Nation Navigating the Cross-Currents of a Big World, which is the most comprehensive overview of the geography, history, politics, culture, environment, and economic development of Seychelles, capped off by his own thoughts on the future of democracy and globalization.

In 2016, Sir James arranged with me to publish another book, this time by Seychelles’ then-President James Michel. This book, titled Rethinking the Oceans: Towards the Blue Economy, was a forward-looking policy-oriented book on using and preserving the world’s oceans. While the US and Europe are land-based and environmentalists have thought in terms of a more “green” economy, 72 percent of the world is covered by oceans and the “blue” economy may indeed have an even greater impact on global sustainability.

Besides meeting Sir James at several international events, I had the pleasure of hosting him on three occasions in Minnesota and being hosted by him twice in the Seychelles. Sir James was a bridge between the old and the new, between the world of Winston Churchill and Charles de Gaulle, and the world of US Presidents Bush and Obama, Arab sheiks, and global unrest. At the time of his unexpected passing, he was working to help develop a peace studies department at the University of Seychelles. The world has lost a true statesman. Rest in peace, Sir James Mancham.