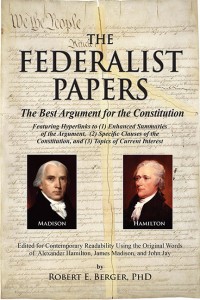 Paragon House has made available a new edition of the Federalist Papers designed for e-book readers.

The Federalist Papers were written over 200 years ago as an argument for the U.S. Constitution. They contain an understanding of human nature, political power, and core principles often ignored by today’s political leaders, courts, schools, and the media. This ignorance has led to the breakdown of our political systems and to an unchecked growth of government. The application of these principles to our current governments can unleash the freedom, human energy, optimism, and economic productivity, necessary to provide a foundation for peace.

Yet, despite their importance, few Americans have read this classic document. Its 18th-century style, as written by three lawyers, is unnatural for contemporary readers. This new edited version—using the authors’ original words and enhanced with outlines, subheadings, bullet points, and hyperlinks—removes these obstacles and brings forth the argument, making the Federalist Papers easy-to-use and understand in the age of the Kindle, Nook, and I-Pad.

In Federalist 62, James Madison explains that the role of the founders was (1) to understand the purpose of government (the happiness of the people) and, (2) the best way to achieve it. In Federalist 10 he warns against the pooling of money together, creating factions, that will have more influence over the laws and the government than the voters. The U.S. Constitution was developed to prevent such factions from controlling the system and taking it out of the hands of the people. However, this is exactly what corporate lobbies, the Republican and Democratic Parties, labor unions and other special interests are–factions with more influence than voters.