Remaining True to Our Pledge 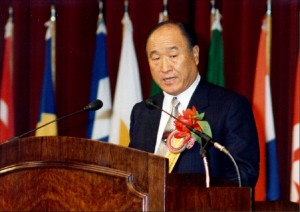 The Rev. Sun Myung Moon died early Monday morning, September 3, in South Korea. He was 92. We want to thank those scholars who have written to express condolences on his passing, and to issue a statement on behalf of Professors World Peace Academy (PWPA). 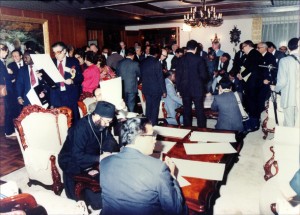 In December 1983, on short notice after an International Conference on the Unity of the Sciences, Reverend Moon called high ranking scholars from 72 countries to organize PWPA International. Gathered in Seoul, they issued a document titled “Our Resolution and Pledge” in which they proclaimed their resolve to work with the Rev. Moon “towards the establishment of a God?centered world of universal fellowship and harmony in which the terrible wounds of the past arising from differences of history, culture, nationality and race will be bound up and healed.” 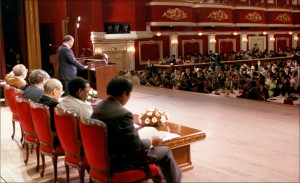 Reverend Moon Addresses the Mission of PWPA at the Little Angels School in Seoul, Korea

Following that gathering, Reverend Moon spoke to the new PWPA leadership and others gathered at the Little Angels School, in Seoul, Korea, a school for culture and the arts which he founded, giving them his vision for PWPA. Excerpts that encapsulate this vision follow:

I am pleased to have this opportunity to share with you some of my convictions on the occasion of this International Congress of PWPA. I have long thought that in addition to their scientific achievements, scholars must be pioneers in the realm of conscience, inspiring mankind by their bold and determined actions… I founded the PWPA to be a trailblazing organization at this critical moment in human history, able to mobilize those intellectuals who have devoted their lives to the advancement of human wisdom and enable them to play a leading role in overcoming the dangers of the age and opening new pathways to world peace. The ultimate goal of PWPA is to help create a just and harmonious world order by encouraging scholars to search for new ideas and methods of achieving peace and prosperity. The PWPA should provide scholars and other concerned leaders with the resources they need to solve the fundamental problems facing humanity. I believe that the PWPA should be international, multidisciplinary, future-oriented and action-oriented. No single discipline, no local prescription, can solve the problems facing humanity in this century. Mutual cooperation beyond na­tional and regional boundaries and in­terdisciplinary study beyond limited spe­cializations are absolutely necessary.

If the world is to overcome its many problems, it needs leaders. I sincerely hope that the members-scholars of the PWPA will participate actively, not pas­sively, in the search for and realization of universal human ideals. The PWPA exists not only for the advancement of the sciences, but also for the practical promotion of the well-being of mankind, thereby differing from most other schol­arly institutions. Its members should be­come social activists, orienting their stu­dents in a positive direction, seeking to influence public opinion and playing a leading role in public affairs. I encourage you to grapple, in a non-violent manner, with the most difficult and pressing social and philosophical issues of the age, in order to provide humanity with the lead­ership it needs to cope with the seemingly insoluble problems it faces…

It is an absolute requirement in this era that education for the coming gen­eration be shaped by the firm moral con­victions of their professors, who must communicate a clear sense of values. This must be the basic attitude of edu­cators. From this point of view, the role of a professor is the same as that of a religious leader. We educators must as­sume the responsibility not only for transmitting facts, but also for sharing with our students the meaning and pur­pose of human life.

In the nearly 30 years that have passed since Rev. Moon provided this vision to PWPA leaders, the world has changed significantly: the Soviet Union has collapsed. China has become an economic powerhouse. Many of the newly indigenous regimes replacing the former colonial powers in Asia and Africa have not fared well politically and several of the established liberal democracies have been burdened with unsustainable debt and suffer from out-of-control bureaucratic expansion.

During the same years, PWPA chapters were established in over 100 countries, hundreds of conferences have been held, and countless books and other publications have been prepared and issued under PWPA sponsorship. The International Journal on World Peace has become an established journal in the field of peace studies.

Today Reverend Moon’s vision and hopes need to be applied to contemporary problems more than ever. On his passing, PWPA wishes to reaffirm its commitment to the vision and mission set before it, and express its thanks to its Founder for his generous spiritual and material contributions. It is incumbent upon the PWPA today to vigorously continue its several initial missions for advocating the causes of global and inter-religious tolerance and understanding, eradicating poverty and suffering, and challenging the growing scientific knowledge to better serve the causes of societal progress and peace.