From the Foreword, The Seeds of True Peace, IIFWP

It is with great pleasure and pride that I set down to write a forward for this monograph which celebrates the exceptional peace mission—consisting of many struggles and successes—of a man who indeed needs no introduction: the Reverend Sun Myung Moon. I can add little, indeed, to the public record enumerating the accomplisments of the Founder of Unification and its many innovative, courageous, dazzling and globally impacting progenies. 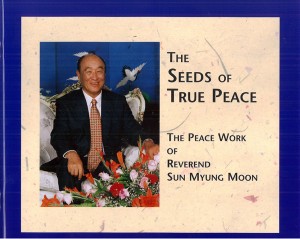 I have known the Founder, his wife, his children, his principal disciples, his supporters and many of the dedicated workers in the Founder’s diverse vineyards for some two decades. I knew them when they first ventured forth to spread their unique and contagious beliefs in the central role of the family, individual responsibility, and the joys of human fraternity throughout the world. I also knew them when they emerged and like the Old and New Testament’s prophets and disciples came under attack and siege by narrow-minded and jealous adversaries. I have witnessed them in their many hardships, but also successes, and often during their hours of vindication.

Not once, but many times during my long and creative association with Reverend Moon’s worldwide projects, all dedicated to the pursuit of human well-being, tolerance, harmony and peace, I have been questioned and challenged by some colleagues as well as adversaries: “Why is it that you,” they would ask, “you, with your sheltered and secure niche in the establishment, a distinguished academic and prolific writer, a descendent of an ancient family with roots dating back to the hills of Galilee and the Phoenician, Roman, Dutch and British empires—a lawyer and member of the most doubting and often most cynical of professions—why have you invested so much time, energy and goodwill in this relation¬ship with a young and newly emerging movement and its exceptional leader?”

And my answer has always been plain and simple, and it remains so today. As a youth, I met the Muslim Grand Mufti of Jerusalem, I was later introduced to the Pope in Rome, and I got to know the chief Rabbi of Israel. But not even one of these ever asked for my or any of my friends’ opinion, advice, assistance, participation, or collaboration. They all were too deeply immersed in their own pasts, their own institutions, their own missions, and their own faiths to reach out much beyond their constituencies.

It was in Reverend Moon that I found the broadest ecumenical spirit, a fierce commitment to the unity and fraternity of mankind, an unflinching love of all people, a total commitment to the institution of the family, a tolerance for the diversity of humankind and the need for its harmonization. I also found in him the wisdom to blend the Occident with the Orient, the North with the South, an ability to combine eternity with a sense of the contemporary reality, the insights to create a bridge between science and faith, the courage to wage warfare against escalating hedonism, and an abundance of the divine as well as the human gifts of humor and love of life.

“It is by its fruits that you shall know the tree,” the gospel teaches us. We have all indeed been witnesses to the rich fruits borne by Reverend Moon’s many and diverse trees and orchards. We count among these his contributions to the Unity of Sciences, to publishing, to his endowing Washington, D.C., the claimed capital of the free world, with its second and alternative daily paper. We recognize and applaud his stance on behalf of liberty and economic progress in the former Soviet Union and in Latin America, his quests for the unification of the two Koreas, his efforts to create a system of international universities, his building new bridges between professors, scientists, political leaders, the media, economic innovators and social reformers worldwide. Most of all, we must note his constant inspiration for all those seeking to better the human condition worldwide—through the elimination of deprivation, poverty, hunger and disease, and through the institution of a reign of peace.

Let me conclude with the words of Ralph Waldo Emerson, one of America’s most original, thoughtful, and optimistic philosophers:

Institutions are, by and large, the lengthened shadow of singular men…and all history resolves itself very easily into the biography of a few stout and earnest persons.

Reverend Sun Myung Moon is certainly one of these persons. His place in human history is assured. We merely must make certain that the seeds he planted for true peace are nourished by all of us throughout the world.